Getting everyone involved in the transition to a service and/or digital organization. Make the transition to a scalable family business. Successfully manage the transfer of the business to the next generation. And maintaining intensive contact with customers and prospects in corona time. These – and more – challenges came to pass in the Industry Debate on 2 September in Drunen. ‘Quality above all? Nonsense. The Action shop is doing extremely well’.

The debate was scheduled for the ESEF-Technishow, but had to be rescheduled because of the Covid-19 virus. In the Ginkelse Hoeven in Drunen, home of H&J Publishers, the publisher of Link Magazine, this is now possible. In a tent, in which the six participants in the debate, discussion leader Richard van Kray (director of D-Tail Consultants) and the five representatives of the initiators can easily keep the one and a half meter distance. The debate consists of introductions (who are you, what does your company do?) and debate. Serious and sometimes less serious – there is a lot of laughter. I tested positive last week. I downloaded the corona app. The intended theme is ‘Stay relevant. Digitize’, but that is far from it. Swah, what would it be: entertaining and animated it certainly is. And it brings up a few broadly supported challenges or concerns.

Corona is one of them. Lotte van de Ven, ceo of Vencomatic, addressed the issue. The family business (500 employees) develops and produces innovative housing systems for poultry and egg packing machines and generates 95 percent of its turnover from exports. ‘Our customers and prospects want to feel our systems and see how the animals move in our laying nests. Before corona, we had a trade fair every week somewhere in the world, but it has completely stopped. And travelling is also difficult. How do we keep in touch with customers? Teams, Skype, webinars… – we do it all. But that doesn’t come close to physical contact’.

Guido Bergman, CEO and owner of Matas Electronics (which produces electronic components and assemblies), thinks it’s only a matter of time: we’ll get the virus under control. Apart from that, he observes that the young generation has embraced social media. Matas, who has been firmly committed to automation/digitalization for years, has everything in place to allow employees of Purchasing and ICT, among others, to work from home. ‘But after eight weeks I said: “Boys, please come back”. The ‘schwung’ had left the company. We worked just as hard at home and yet we saw the time from order intake to production increase dramatically’.

David Kemps, sector banker industry of ABN AMRO, has another positive experience. ‘In retail banking, banking for private individuals, video calling has become normal. But in corporate banking that was out of the question: customers should be visited regularly. But what did we learn when that was no longer possible? Customer satisfaction rose by leaps and bounds. And why did that happen? Appointments are no longer postponed because you’re stuck in traffic jams and conversations are shorter, more to the point’.

Does working from home work or not? All research into this points in one direction, says Bram Schildkamp, CEO of metal wholesaler MCB: ‘The general consensus is that working from home is fine for executive tasks, but certainly not for creative and problem-solving tasks’. Menko Eisma, general manager of Trumpf Nederland, confirms this: ASML is now in the process of switching back to full occupancy. And he should know, because his organization has to pull out all the stops to hire as many as twenty new people every month that Trumpf can deploy in the EUV project at ASML.

Corona was the reason for Bronkhorst High-Tech to do a test with shifts, says managing director Henk Tappel. Two shifts of six hours instead of the normal eight hours, we ran at 75 percent. And yet… just as much output left the factory’. Tappel does not want to draw hard conclusions from that – other than that ‘the human contact factor has been disturbed, in fact it has almost disappeared’. There was no more whining and walking around, in short: a completely different behaviour. We now know that Microsoft Teams is an excellent tool for making your account management more efficient. But we’ve also discovered how indispensable it is to talk to each other at the coffee machine.

Melanie van Beek, operations manager at Broshuis Parts (and interim logistics manager at the parent company Broshuis), has also experienced the past few months as difficult. ‘Rounding things off, writing reports; it’s going well at home – even better. But giving people a push to get something done quickly, that doesn’t work by phone or email’. Tappel: ‘For a director, walking around, acting on what’s happening, is half the work. Van Beek: ‘We have a fairly impressive factory, with impressive products (trailers for special transport, ed.). When a customer walks through the company, he gets that Broshuis feeling’.

The problems that family businesses face are also an issue in Drunen. Jellard Koers, CEO and owner of Suplacon (supplier in sheet metal working, ninety employees), has to deal with this. He is going to hand the company over to the next generation – his eldest son is a candidate – and of course he wants to do so successfully. By fully facilitating employees to further develop themselves through education & training, if desired for a job elsewhere, he has managed to create an atmosphere of openness to change. Suplacon is, he says, ‘an organization on wheels instead of wooden blocks’. People are open to digitization. And switching jobs or job descriptions goes smoothly with us’.

Brinkhorst High-Tech (now 100 million euros turnover, 500 employees) is facing the challenge of becoming a scalable family business, as Henk Tappel puts it. ‘Growth is not a goal in itself: we grow because we make quality products and customers, who grow themselves, come back to us to buy the next generation of products. And we grow extra, because new customers come to us that you also want to help’.

This growth causes tensions. Not everyone knows everyone anymore, people don’t know everything that’s happening anymore, which sometimes evokes feelings of homesickness in older employees that ‘everything used to be better’. And newcomers no longer reach the level at which they learn everything, the management can no longer oversee everything. For any company that has grown above 200 employees, this is a critical phase. Especially for family businesses in which the owners are sometimes still active as shareholders or supervisory directors. They have an incredible loyalty to those who were hired ten years ago. And there are all underground rivers running towards them, bringing information to light that remains hidden from the newcomers. So yes, now and then it is quite difficult to maneuver’.

Lotte van de Ven from Vencomatic recognizes that. Father Cor is still walking around there as well. He is a very good ambassador and I appreciate his advice. Yet I said: ‘We’re not going to pull this cart together’. And that’s working pretty well, I have to say. The more confidence he has, the better he can let go’.

Jellard Koers wouldn’t have thought five years ago that he would still be active today in the company he bought years ago. But he’s in a different role now. ‘We’ve formed a talent pool of six young high school graduates who’ve taken over most of my tasks. The time I have left as a result will be spent on innovation, digitization, external contacts, training, education and so on’. 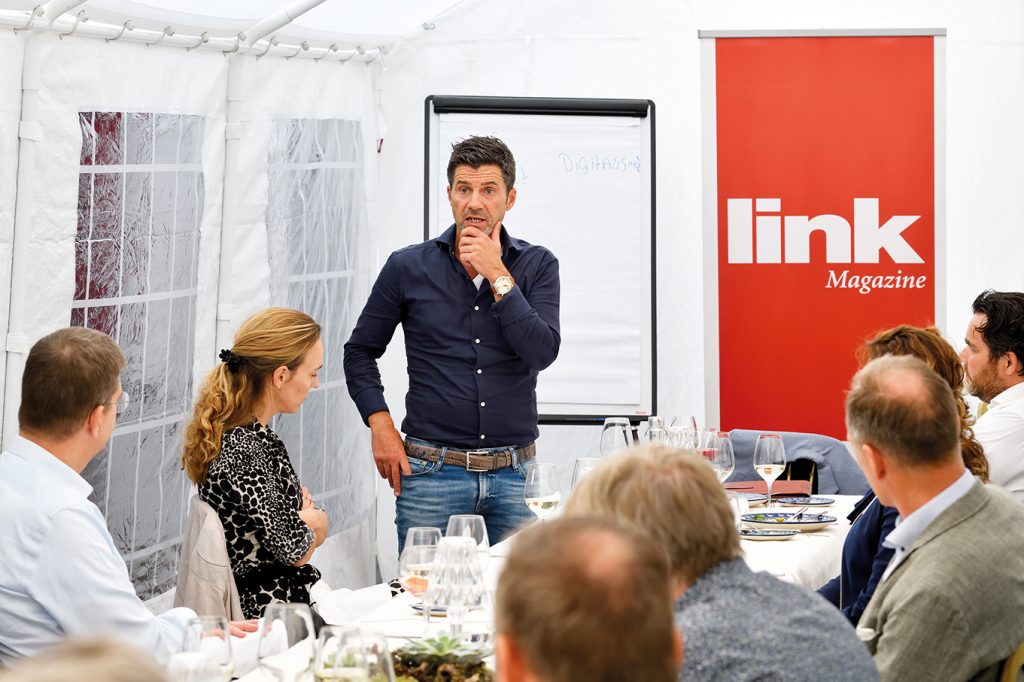 Suppliers such as Matas, MCB and Suplacon are gradually moving up the chain: they are increasingly sitting at the customer’s table to think along with them about the best solutions. ‘Our biggest challenge is to make the transition from a product-oriented to a service-oriented organization; we call that “experience”, says Erik Spikmans, director of sales at MCB Nederland. ‘This requires different qualities from our sales people: to help customers do their business better, they have to become ‘customer ambassadors’.

Bram Schildkamp adds: ‘You can’t work together without trust and you have to understand what you want from each other. That means that we have to talk to the management or the owner of the company. They act differently from the buyers in the game and often go for the long term, they want to continuously improve and enter into a relationship’.

Discussion leader Richard van Kray did not fail to impress that evening. His consultancy firm in Den Bosch gives sales trainings and Richard is the author of the book ‘Sales from your heart’. He enthusiastically talks of how he believes sales should be conducted sustainably and successfully. The conversation becomes fun and animated from his first statement: ‘The more people want to belong, the less important price and quality become. Some examples: ‘Price is right, quality is not – it’s always on top (Guido)’; ‘Quality has 300 definitions’ (Henk); ‘Quality above all? Bullshit. The Action is doing very well’ (Bram); ‘Zeeman has a very good price/quality ratio, but no young person wants to be seen in their clothes’ (Jellard); ‘I want the best quality steel, whether that comes from supplier A, B or C does not interest me’ (Melanie); ‘You want a lot more: you don’t want something made by Chinese children, that is radioactive, etcetera’ (Bram). Who has ever bought something from Rituals with its smells that are easily four times as expensive as those of Xenos’, Richard adds. ‘Because it’s good stuff’ (Lotte). ‘I like ETOS razor blades better than that expensive Gillette Venus with his giga-marketing device’ (Melanie). ‘A bottle of champagne at YabYum is available in gold, silver and bronze. All the same drink and yet almost everyone buys the gold’. (Guido). In short, the debate provides a lot of food for thought.