Over the past decades, chips have become increasingly fast and energy-efficient, and the technology to produce them has become more complex as a result. The players in the semicon chain are all specialists, world leaders in one or two steps in that value chain. A global chain in which the work is done where the conditions are best. A balanced status quo that, however, now suddenly cannot stand the test of politics. An interview with Infineon chief executive Rutger Wijburg about the ‘exciting time’ ahead, in which competencies will be redistributed. ‘A global war for talent is about to erupt.’

‘It would be unwise to opt out’

‘Chips? We can buy them. Developing and producing semiconductors is too cyclical an activity and distracts us too much from our core business. So we’d better forget about them.’ In short, that must have been the reasoning of the boards of Philips and Siemens when they decided to dispose of their semiconductor divisions at the beginning of this century. These continued independently as NXP and Infineon respectively. In the years since, it has become clear that ICs play a role everywhere in the economy, just as oil (still) does. Chips have proved to be far from cyclical. They are now indispensable in every economic sector and play a crucial role in solving the major challenges facing humanity. Chips are found in every electronic product, are indispensable in electric cars and wind turbines and crucial for the Industry 4.0 that can only be brought about with innovations such as edge computing and artificial intelligence. Nevertheless, Rutger Wijburg does not want to call the decision of the Philips and Siemens boards an ‘error of judgement’. 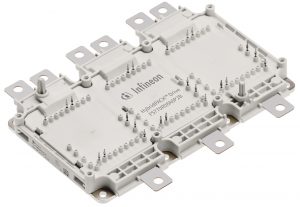 Wijburg is by no means a random person to be asked for his opinion on this matter, as his CV demonstrates. He started his career at Philips Semiconductors in Nijmegen and stayed there until 2011 when it had already been NXP for quite some time. From there he made the move to the GlobalFoundries office in Dresden, East Germany. There he turned the former plant of American AMD, an Integrated Device Manufacturer (IDM) where both IC development and manufacturing are done, into a foundry dedicated entirely to producing chips for customers who develop them themselves. In 2018 he moved to Infineon Technologies, formerly part of Siemens AG. Not coincidentally, it is also located in Dresden, currently the world’s fifth largest semiconductor ecosystem, which also includes Bosch Semiconductor Manufacturing and the Fraunhofer Institute, ahead of Eindhoven/Leuven in sixth place. Since last January, Wijburg has held the position of executive vice president, global front-end manager at Infineon’s Munich head office.

He starts the interview via Webex with a sigh of relief saying ‘that he is able at last to have a conversation in Dutch’ and apologises in advance for any Germanisms and Anglicisms he may use. The discussion then quickly turns to the decision by the Siemens and Philips boards to hive off their semiconductor manufacturing operations. ‘No, I wouldn’t call that an error of judgement. After all, it is impossible to anticipate all technological and market developments. And the zeitgeist was different. The current geopolitical tensions, particularly between China and the US, did not exist. So these types of decisions were made.’ Decisions that have helped to create all kinds of specialised companies, but well integrated in a global semiconductor industry. ‘In which sub-operations were carried out where the best resources were available at the lowest price.’

The availability of talent allowed ASML to grow into a machine builder without which the enormous efficiency gains of the semicon – within 30 years from thousands to billions of transistors per square millimetre of IC – would not have been possible. Some of the talent comes from Imec a little further away in Leuven, which has developed into the leading research institute in the field of IC manufacturing processes.

After the fall of the Wall, the necessary EU funds allowed Infineon Dresden to grow into the world’s largest plant for the development and production of discrete devices and power ICs for the efficient conversion of electricity. Essential technology for electric mobility and wind and solar power and hence for combating climate change. Infineon, together with NXP, also has a key position in the development and production of chips needed for edge computing, essential for managing the massive data flows that Industry 4.0 will bring. So says Wijburg about some of Europe’s key positions in the global semiconductor chain.

But Asia and the US have them too. It is not without reason that the top 4 largest semiconductor ecosystems are located outside the Old World. Number one today is in Taiwan with TSMC being by far the largest foundry in the world, for ICs for almost every application, including the most advanced in the 5 nanometre range. By 2023, the company hopes to be producing even 2 nm chips. A company with a turnover of 38.3 billion euros (2020) that has mastered the extremely delicate production process, consisting of 700 to 1,000 different steps, that results in finished 300 millimetre wafers after two to three months. The US, with companies such as LAM Research and Applied Materials, has machine builders in house that control other – not much less crucial – process steps. And with big tech companies such as Amazon, Apple, Microsoft and Google, the Americans have by far the most important data processors/cloud service providers, in this case those applying semiconductor technology.

At first glance, it looks like a fairly even distribution of the various necessary semiconductor competences across the three continents that has worked well for a long time and forms the basis of the enormous innovation that the sector has undertaken. For geopolitical reasons, however, this distribution is no longer sufficiently balanced. Intel has long been the leading chip manufacturer, capable of producing the most advanced chips. TSMC has taken over that position, and in the past year it has suddenly become a political issue. The same applies to the ‘only 8 percent’ of chip production that takes place on European soil. This has everything to do with the rapidly growing power of China, which is rivalling the US. And that, even in the view of non-politician Wijburg, makes the economies of Europe and the US vulnerable. ‘Because what if China decides to seize their “renegade province” of Taiwan? This is why Intel wants to expand its production capacity, in the US but also in Europe. Why TSMC has a major foundry planned in the US and – along with Sony and Toyota – in Japan. Why GlobalFoundries is expanding its production facilities in Germany and the United States. And why we are also expanding our capacity’, says Wijburg. Infineon has always kept wafer production (front end) in Europe, has recently expanded it in Dresden, and is commissioning a completely new plant this fall in Villach, Austria. 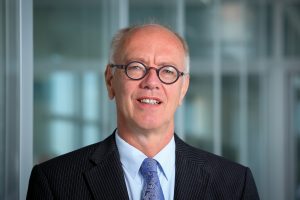 ASML’s Peter Wennink has since publicly ‘fully committed’ himself to the European Commission’s desire to step up chip production in Europe, but said during a webinar at the digital Hannover Messe in April that he was still not in favour of semicon supply chains per continent. ‘The process from chip design to a chip built into a mobile phone requires more than a thousand steps that cross about 60 national borders. The chip builders in South Korea, Taiwan and the US need our technology for this. And we their business. You should not look for European technological sovereignty, but for mutual technological dependence.’ Rutger Wijburg thinks this is a ‘good idea of Peter’. ‘Because localisation – local4local – is bound to cause inefficiencies in semicon. And you certainly won’t be able to build everything locally.’

An ASML-per-continent seems almost out of the question. But the material development that takes place at Imec also cannot easily be copied. The ecosystems mentioned, such as those in Eindhoven/Leuven and Dresden, with their power to innovate, do not allow themselves to be duplicated, says Wijburg. But when it comes to manufacturing, that is a different story, even for Infineon. The company undertakes the more fundamental technology development in Europe, the development of products and systems for the market largely takes place in the US and Europe, but the innovation of packaging technology (which connects chips with the surrounding technology) is entrusted to Asian branches of the group. ‘We want to retain that division, but I realise that a global war for talent is about to erupt.’ 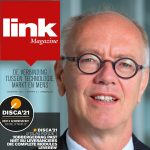 ‘The world should not be surprised that China is trying to build its own ASML. Huawei and SMIC are definitely suffering from the US special export control of critical technologies and/or tools to China. So China will try to localise all the technology needed for chip production in China. The Americans are also localising, for example by inviting TSMC to build a large new plant in Arizona. Companies such as ASML and Imec ensure that Europe holds important keys. And Europe also has localisation plans. After all, Europe now produces only 8% of the chips for market of critical applications, while we hold 20% of that worldwide market. So the goal is to design and produce 20 percent of the chips in Europe again.’

Infineon is going to contribute to this. ‘We are building additional production capacity in Europe. To avoid dependence. To supply markets such as European automotive, medical technology and industrial automation. The apparent need for semicon development and production to localise is unfortunate, but it is understandable for reasons of power politics. And it would be unwise to opt out. Infineon is a European company then and will remain so. Culturally speaking, Europe is now the closest.’

‘It’s an exciting time. I haven’t experienced this in my thirty years in semicon,’ he says, looking cheerfully into the webcam.