A very brief guide to autonomy

Autonomous systems have been around for some time now, but interest in autonomous technology has exploded in recent years in the wake of such autonomous technology used, e.g., for the Mars Rover. Launched in 2003 to explore the surface of the red planet, this self-controlled vehicle, using the on-board computer, had to find its own way, as communications with ground control were taking at least six minutes. Self-driving cars with varying degrees of autonomy account for a large part of the growing interest, but there are many other business areas that can benefit from autonomous technology as well. As will be shown by Michelle Hirsch, the head of MATLAB Product Management at MathWorks, a leading developer of mathematical computing software for engineers and scientists, in her keynote presentation at MATLAB EXPO 2017 on 20 June in Eindhoven, the Netherlands, entitled ‘How to build an autonomous anything’. 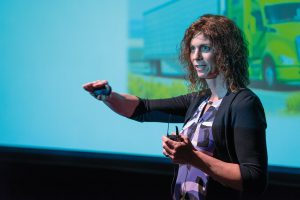 ‘Autonomous technology will touch nearly every part of our lives, changing the products we build and the way we do business,’ Hirsch says. ‘Not just in products like self-driving cars, robots, and drones; it can be used in a wide range of application areas like predictive maintenance, automated trading and medical image interpretation.’ Hirsch identifies three main drivers behind this (r)evolution: the availability of ever-increasing computing power and sensor technology for data acquisition and processing; advances in algorithm development for the analysis of big data; and the flexibility to leverage both cloud systems and embedded devices for deploying autonomous technology. To illustrate the rewards, she takes a look from the creator’s perspective and that of the user. Building autonomy into an existing product or system increases a manufacturer’s competitive edge. This is directly related to the benefits the customer gains from autonomous systems, such as an improved efficiency and savings on cost and time. ‘Safety is a major concern too. Autonomous systems offer the opportunity to tackle more challenging jobs and do things that aren’t safe for humans.’

Although the deployment of autonomous systems is generally not as complex as a mission to Mars, there is not a lot of movement in the market, Hirsch observes. ‘That said, I’m surprised to see how many engineers are investigating machine learning for instance. In recent years, MathWorks has developed tools for machine learning and deep learning to complement our model-based design and big data analytics offering. We have a mature tool chain that helps users to integrate autonomy into their systems.’ That’s not to say that Hirsch advocates the instant transition to full autonomy. ‘Yes, there are people talking about that, but for practical reasons and safety considerations, I suggest an incremental approach. By adding bits of autonomy, designers and users can learn how to work with this new technology.’ ‘In that way, they can gradually shift from deterministically controlled to supervised to automated operation and finally to fully autonomous adaptive systems,’ Stephan van Beek, Technical Manager at MathWorks Benelux, adds. Hirsch: ‘This will be the main message of my keynote. I want to demystify autonomous technology and show engineers how MathWorks can help them integrate it into their work.’

According to Marcel Stakenborg, Managing Director of MathWorks Benelux, companies are looking for new ways to innovate and adopt new business models to face increasing global competition. ‘We see an interesting trend, globally and also in the Eindhoven region: industrial companies traditionally rooted in mechanical and electrical hardware engineering are starting to add more and more software components to their products to improve machine performance and predict machine failure, among other things. They’ve started to rethink their business models and are asking how they can make money on services, in addition to the revenue generated by product sales. Servitization is hot.’ The rise of autonomous technology is forcing industrial companies to rethink their in-house software development strategy and capabilities. ‘In the Netherlands, for instance, DAF is working on self-driving trucks,’ says Stephan van Beek. ‘Meanwhile, CSi is investigating the use of drones for case-picking and academic researchers are adding autonomy to robots,’ he continues, Stakenborg adding that ‘software is driving these developments, and MathWorks offers a powerful set of tools to enable our customers to embrace this trend. Most companies know us as the provider of technical computing software. At this year’s MATLAB EXPO, we will showcase the benefits and capabilities of using our tools for data analytics and autonomous technology.’

‘This trend is also affecting MathWorks itself,’ Stakenborg concludes. ‘As a vendor of technical computing software, we’ve turned into a strategic enabler for software-based innovation. We’ve become a mission-critical business partner in supporting our customers for new business development. We’re engaging with customers on a higher, more strategic level, involving technology roadmapping and looking for ways to maximise the business and technical impact of our solutions.’ This, he explains, is why MathWorks collaborates with Link, a magazine that is creating awareness by focussing on the challenges and possibilities of software-driven innovation. ‘Because there’s no turning back,’ he adds, illustrating this with something one of his customers said: ‘As a machine builder, we have to transform our company from a hardware shop to a software powerhouse.’

Business is no longer just about selling a machine or apparatus, with future business models focussing on service instead. Software plays an indispensible part in this servitization strategy and at every stage of the value creation process, from initial product development right up to series manufacturing.

MATLAB EXPO is a one-day event organised by MathWorks, where engineers as well as product and line managers can learn about the latest product capabilities of MATLAB® and Simulink®. Users will present innovative applications they developed using these MathWorks tools. There will also be ample opportunity for networking and visiting demonstrations of real-life applications by MathWorks and over fifteen partner companies. The event in Eindhoven will feature a keynote presentation by Hardt on revolutionising transportation with the Hyperloop and one by Tessella on the design of an autonomous control system for ESA’s Solar Orbiter satellite.