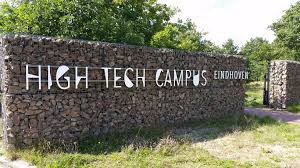 The High Tech Campus in Eindhoven is flourishing. Last year, the number of companies based there increased to 150. Large corporates, but also small start-ups – together employing approximately 10,000 people representing 80 nationalities. They are drawn from the sciences, such as mechanical engineers and physicists, but also from the arts, such as economists and psychologists. ‘Long live diversity’, as Cees Admiraal, business development manager (Campus Site Management), puts it.

‘If you succeed in discovering and utilising the enormous diversity available here, there’s no better place to be’, he says. Ferrie Aalders, a member of the Philips Research management team, agrees. Around 15 years ago, Phillips took the bold decision to open the Philips Research complex (formerly Philips’ Physics Laboratory) to third parties – in order to create an ecosystem of ‘open innovation’ that offers the space, facilities and entourage for cross-fertilisation and accelerated innovation.

Now, in 2016, Phillips is still the largest campus resident, closely followed by NXP, formerly Philips Semiconductors. Aalders: ‘We have our Research head office and biggest lab here – and it’s an excellent location. Talented people from abroad and from outside the region come here not just for a job at Philips, but also for a career in an ‘innovation region’ with a lot to offer. There are plenty of opportunities to switch and to keep developing.’

Cooperation with third parties, on the campus and (far) beyond is an ever more important success factor, he says. ‘When I started working here in 1985, the site was closed to outsiders. Around 15 years ago, it was thrown open to other firms and they started moving in; first a few, then more and more. A sign that patterns of collaboration are shifting.’

‘The next stage, which we are in the middle of now, is that our researchers are no longer working in labs but in those places within society where we can learn and add value. Where it’s really happening – in hospitals, in care homes and the like. They are standing beside the surgeon in the operating theatre and beside the nurse elsewhere in the hospital. In short: we are participating much more in those processes – in order to learn from them, in order to be able to develop optimum solutions in terms of products and services, and in order to be an interlocutor and adviser to our customers. All based at the High Tech Campus, with its open innovation climate and tip-top (shared) facilities.’

No plans to move

Phillips doesn’t shrink from reinventing itself, nor from setting up shop elsewhere. Ferrie Aalders: ‘Last year, we moved a research lab from Briarcliff (near New York, ed.) to Cambridge, Massachusetts, near Boston. The reason? That’s the home of MIT, with whom we are developing a strategic partnership for new digital techniques. But we are happy with our location in Eindhoven; we have no plans to move in the Netherlands.’

While large corporates like Philips and NXP feel comfortable at HTC Eindhoven, the same is true of small start-ups. The campus is increasingly emerging as a breeding ground for start-ups and scale-ups. Cees Admiraal: ‘We like to see the bright young things coming here. They find the network and the climate to thrive here. The HighTechXL start-up boot camp, which will shortly be held for the fourth time, is also part of that story.

Take Smart Robotics, which has been based at the campus since its inception on 1 May 2015; see adjacent text box. Heico Sandee, founder and managing director of Smart Robotics along with Mark Menting, confirms that the campus is pricey for start-ups. ‘But what is more important is that we get an awful lot for our money. The campus is very active in bringing parties together. Every one or two weeks, they will suggest a contact, a lead or a partner from their enormous

network. And the services they offer are brilliant. From the first day we were here, we had an internet connection and lots more; everything was laid on. That means you can focus on the things you want to focus on. We are earning back those rental costs in spades.’