The Eindhoven University of Technology (TU/e) is an important source of knowledge and young research talent for the high-precision industry in Southern Netherlands. But fulfilling that role properly has come under pressure. The industry is desperate for research results that are more commercially viable than the university can deliver at present. And for more graduates than the university can offer at present. While the attraction of research centres and overseas companies to scarce talent is increasingly growing. An outside world where you can simply ignore the ‘Balkenende standard’ and governments invest more heavily in technical education and research. President Jan Mengelers expresses his concerns and wishes and fires a few warning shots across the bow by suggesting to split up TNO (Netherlands Organisation for Applied Scientific Research). 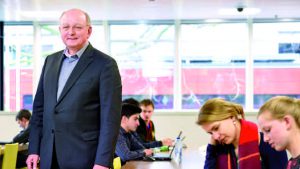 Jan Mengelers hopes that additional investment in technical education will find a place in the coalition agreement of the new government. ‘Because then it will indeed be possible to give technical education programmes a higher funding priority.’ Photo: Bart van Overbeeke

Jan Mengelers, President of TU/e, advocates for splitting up TNO

Medical education currently has funding factor 3, technical education has funding factor 1.5 and the other programmes funding factor 1. ‘If you look at the labour market demand figures of the ROA (Research Centre for Education and the Labour Market, etc.), the only segment where the labour demand is twice the supply is the technology segment. In all other segments, the difference is either much smaller or the supply higher. This alone should bolster the argument in favour of raising the funding factor to 2 or even 3.’ Mengelers is mindful of the fact that additional budget cannot be quickly converted into additional academic scientific staff, or more education infrastructure. That is why he is calling for a ‘Reverse Knowledge Workers Granting Scheme,’ referring to the scheme that was put in place during the 2009-2010 financial crisis years. This scheme made it possible for the government to contribute financially to the salary of talented but redundant knowledge workers who were able to spend some of their time on innovation projects at research institutes: ‘Let the government help in paying the salaries of R&D people in the high-tech industry so that they can devote part of their working time to serving as guest lecturers at a university such as ours.’

Mengelers also advocates for spending the limited investments in technical education more effectively by selecting students on the basis of talent and motivation. Not that he is in favour of the selection-at-the-gate strategy as is the custom in Anglo-Saxon countries. ‘In the Netherlands, we have all decided that a secondary education diploma is sufficient to gain access to higher education. I think that’s great: health care and education should be as accessible as possible.’ But the process of choosing a study programme that best suits a prospective student could be better managed, continues the president: ‘Here in Eindhoven, we have a scale-up, StudyPortals (150 employees, ed.), of an alumnus of the TU/e, who specialises in matching students to the right programmes. Scouting for talent among students in the Netherlands could be done better.’

He immediately compares this to the world of pro football: ‘Like PSV (he sits on the board of the foundation in which the club’s shares are held, ed.) continues to follow its club-trained players’ careers after they leave, we as a university have to do much better in terms of following the careers of our alumni and former employees. So we know when they are at a stage in their careers where working at the TU as a researcher would be attractive to them. And we can make them a well-timed offer.’ However, just as between European clubs, the budgetary constraints between universities can also vary widely. ‘The budget of MIT, our role model in the US, for example, is seven times higher than ours, while we have the same number of students and two and a half times as many employees. There are also increasingly more institutions in the Middle East that are offering our talents three times the salary we offer, plus a private lab. This can increase the exodus of talent and that concerns me.’ Adding with a quasi-confident look, befitting an ‘unfeasible’ idea: ‘Actually, we should follow the example of the football world, i.e. enter into contracts with our talents so that we can ask for a transfer fee….’ As if to give himself a pep talk, he continues: ‘Thankfully we are scientists, different from football players, independent spirits. Who are driven to discover the mysteries of Mother Nature and who do not allow themselves to be swayed by a higher salary.’

On the research front, he sees other foreign practices which can pave the way for Dutch TUs to further strengthen the competitiveness of the country’s high-tech industry. ‘The freedom that professors have, say in Silicon Valley, to pursue extra-curricular commercial activities is much higher than here. Fortunately, scientific knowledge in the Netherlands is often brought to market by creating a start-up. An enterprising professor can buy as high as a 10% share – without voting rights – in the company. In other words, such a professor cannot become a major shareholder, or run and grow the private company in the Netherlands. That is immediately regarded as a conflict of interest. Only professors in medical science are afforded more freedom by their universities. If you step over the limits, you run the risk of getting nailed to the pillory. By the Dutch weekly, De Groene Amsterdammer, for example, which last year published a list of professors and their extracurricular activities and additional earnings. Scientists earning money through knowledge developed with public money is unacceptable, that is the prevailing public opinion in the Netherlands polder. Furthermore, we cannot compensate talented scientists with a higher salary because of the Balkenende standard. And because research resources have not increased here, we cannot bind them with large research budgets.’

As a result, a lot of knowledge with great market potential remains unused, gathering dust on the shelf. His conclusion worded in a neutral tone: ‘If a scientist really wants to undertake something commercially, he would have – is practically forced – to go abroad.’

For him, a much less fait accompli in the polder landscape, is the way the Dutch research community is organised. In his opinion, it would make more sense to concentrate the publicly-financed research activities concerning certain major social themes, from idea to application, on the (technical) universities. A cluster based on the Technology Readiness Levels (TRLs) of zero to six. With the most salient consequence being: splitting up TNO, the Netherlands Organisation for Applied Scientific Research, where Mengelers served as Board Chairman until 2014.

There are nine TRLs, from basic idea (0), through proof-of-concept (3) and R&D prototype (6) to full market introduction (9). The research work of the universities is at levels zero to three. That of the six major research institutes for applied research – in addition to TNO, these are Deltares, ECN (Energy Research Centre of the Netherlands), MARIN (Maritime Research Institute Netherlands), NLR (Netherlands Aerospace Centre) and the DLO (Agricultural Research Service) – is at levels four to six.

The main recommendations in the ‘Evaluation of the applied research organisations (TO2)’ report published last month reads as follows: ‘Create sufficient focus and volume in the knowledge areas the Netherlands wants to excel in, including funding’ and ‘Encourage collaboration among TO2 institutes and other knowledge players. The primary focus in the short term is on strengthening cooperation among technical universities and TO2 institutes.’ This according to the commission headed by Anton Schaaf who prepared the report.

Strengthened by this, Jan Mengelers advocates for integrating research activities from TRL levels zero to six. ‘There is currently little thematic focus, too much fragmentation, distinct separation between universities and research institutes, stagnating the translation of basic research to the market. That is why Deltares, which is completely focused on applied research in water and subsurface, and MARIN can be integrated in their entirety with components of the Delft TU. Because all the knowledge within that university is concentrated on water technology and shipping. The same applies to the NLR. DLO, which is integrated with the Wageningen University in the Wageningen University and Research Centre, is already setting a good example.’

TNO is, as far as he is concerned, too comprehensive. This institute conducts research into topics such as renewable energy, health, nutrition and high-tech systems, defence & security and mobility. Jan Mengelers fires a few warning shots across the bow: ‘At TU/e, we have a High Tech Systems Center headed by Maarten Steinbuch. Technical research into mobility is also concentrated in Eindhoven. TNO’s activities there could be integrated with high-tech. TNO’s chemical research can also be integrated with the chemical research of this university. That is how you can fix the fragmentation of universities, technical institutes and the industry. This allows you to respond much more readily to the needs of society for shorter-term research in a particular area. Applied research is currently conducted at the technical institutes, separately from the university. That is why our university will now organise applied research, around our core fundamental photonics research, the Institute for Photonic Integration, within an as yet to be set up Integrated Photonics Development Center.’